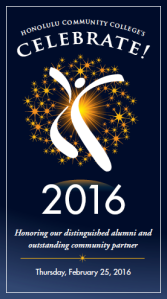 Please join Honolulu Community College for an entertaining evening that will be emceed by lively local personalities Braddah Sam and Lena Girl. The event will include unique, one-of-a-kind items sold during the silent auction, ‘ono food and live entertainment by the talented students of the Music and Entertainment Learning Experience (MELE) program.  All proceeds from the silent auction will benefit the Honolulu Community College General Scholarship Endowment Fund.

Jayne Arasaki is a proud graduate of Honolulu Community College with an associate degree in human services, early childhood education.  As a lifelong learner she received a bachelors degree in psychology and holds a master’s degree in education with an emphasis in early childhood from the University of Hawai‘i at Mānoa. Ms. Arasaki currently oversees the programs for the five nationally accredited Seagull schools on O‘ahu as the Director of Operations. She has over 25 years of professional experience working with young children, their families, staff, and the community. In her spare time, Ms. Arasaki cherishes the quality time she has with her family.

the small and mid-sized business market. Mr. Baker has over 30 years experience providing service to and managing small and mid-sized companies. Mr. Baker is the former Executive VP for the Hawai‘i Medical Assurance Association (HMAA), one of the largest health insurance companies in Hawai‘i. Mr. Baker has taught graduate and undergraduate finance, accounting, tax and auditing for the University of Hawai‘i at Mānoa, the University of Nevada in Las Vegas (UNLV) and Hawai‘i Pacific University and has appeared in various local and national publications.

Karen Kamahele is proud to say that her family has attended Honolulu Community College for four generations. She

credits her success in the fashion industry to Honolulu Community College, completing the program in one and a half years and graduating with honors. Ms. Kamahele successfully worked in many fashion design and manufacturing positions at Kala Kids, Hilo Hattie and currently, Reyn Spooner, Inc.  She graduated with her undergraduate degree in Fashion, Design and Merchandising from the University of Hawai‘i at Mānoa in 2007. In 1993, she started as a lecturer at Honolulu Community College while still managing the Design Department at Hilo Hattie, and she continues to share her knowledge of the industry with students today.

Norman W. H. Loui was born and raised in Mānoa and attended Roosevelt High School. After winning the grand

prize for a carpentry cabinet he built in school, he was inspired to study carpentry at Honolulu Community College, then Honolulu Technical School. He furthered his studies in Chicago at DeVry Electronics Institute. Upon his return home, Mr. Loui and his brother Gordon later opened United Rent-All, which subsequently became Hawaiian Rent-All, the largest rental equipment company in the islands for more than 40 years. Shortly before Mr. Loui passed away in 2006, his last wish was to create a gift of hope for future generations of students at his alma mater, Honolulu Community College. Today, his generosity provides financial support for students enrolled in the college’s technical and trades programs.

Elementary, Central Middle and McKinley High Schools, Mr. Martin graduated with distinction from the University of Hawai‘i Mānoa in 1983 with a bachelors of arts degree in sociology. He later went on to obtain a master of arts degree in sociology in 1985 and a Juris doctor degree from the William S. Richardson School of Law at the University of Hawai‘i at Mānoa in 1995. He has won numerous awards including being named as one of three “Outstanding Young Persons of the Year” by the Hawai‘i Jaycees in 1999. When first elected to the Honolulu City Council, Mr. Martin served as the Chairman of the Committee on Budget. He currently holds the position of Chair and Presiding Officer of the City Council.

Kimberly A. Matunis (’03 Associate in Applied Science, Administration of Justice)

Born in Boston, Massachusetts, Kimberly Matunis joined the U.S. Army and was stationed at Schofield Barracks. She

applied to Honolulu Community College and began working on an associate’s degree in Criminal Justice.   Upon graduation she was accepted into the Army’s criminal investigations unit. In 2004, she deployed to Afghanistan to work the POW camp to process enemy combatant detainees. After returning from Afghanistan, she worked for the Metropolitan Police Department in Washington DC and the Massachusetts Port Authority Police. Currently, Ms. Matunis serves as the Campus Police Chief for the Department of Mental Health Police Department at the Lemuel Shattuck Hospital in Jamaica Plain Boston, Massachusetts.

Hawai‘i based 1013 Integrated (formally Pacific Focus, Inc.) He has been a part of the Pacific Focus Inc./1013 family since 1993 as a tap operator and working his way up to Partner and President. He has personally produced projects for a wide range of clientele, both locally and nationally, to include: the Hawai‘i Visitor and Conventions Bureau, Hilton Hotels in Hawai‘i, Disney Aulani Resort, National Geographic, ABC Entertainment, HBO Productions and Revolutions Studios. Mr. Suapaia is a member of the Pacific Century Fellows Class of 2012, and was selected as one of 40 professionals of the Pacific Business News’s Forty Under 40 Class of 2011. He currently serves as Board President for the Film and Video Association of Hawai‘i, Co-Founded ‘Ohina The Short Film Showcase in 1999, and spends time as a volunteer professional advisor for several high schools and colleges, including his alma mater, Honolulu Community College.

The Building Industry Association of Hawai‘i (BIA) is The VOICE of the Construction Industry. The BIA promotes its members through advocacy and education, and provides community outreach programs to enhance the quality of life for the people of Hawai‘i. The BIA is a not-for-profit trade organization chartered in 1955 and affiliated with the National Association of Home Builders (NAHB). BIA-Hawai‘i is extremely proud of their National Association of Home Builders (NAHB) student chapter at Honolulu Community College and of all of their accomplishments.

Since 1975, Honolulu Community College has been an educational partner with the Pearl Harbor Naval Shipyard. The

Shipyard and Intermediate Maintenance Facility defends our nation by repairing, maintaining and modernizing the U.S. Navy’s Pacific Fleet. The command was officially established as a strategically-critical ship coaling and repair station on May 13, 1908. One hundred and seven years later, the Shipyard remains a vital factor in U.S. national security and in Hawai‘i’s economic and social health. The Shipyard infuses more than $1 billion dollars into Hawai‘i’s economy each year. As the state’s largest industrial employer with more than 4,818 Navy civilians and 505 Navy military personnel, the Shipyard provides well-paying careers for the youth of Hawai‘i with strong Apprentice and Engineer hiring programs, and other student programs. The men and women of Pearl Harbor Naval Shipyard continue to build on their remarkable legacy of keeping the fleet ‘Fit to Fight!’.