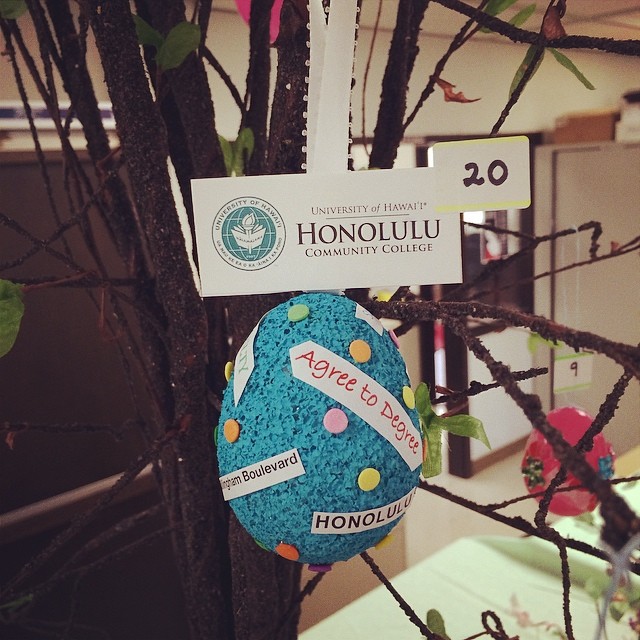 This article was published in the Ka La’s February 2014 printed edition.

Talented and colorful, Christina Luck started her all-girls band as a way for her friends to better learn how to play their instruments. Now they are poised to take off and perform.

Luck, a Honolulu CC student who plays guitar and has written several books of poetry, says she is intensely absorbed in a spirit she channels into music and sound.

“I used to hear music in my sleep, but that experience eludes me now,” she said. “Maybe I am just too preoccupied with other things. I’m wondering how to get that back… sort of waiting for an answer on that. I wonder how that happens.”

Luck said the latest chapter in her life started about two years ago, when she was home in Hawaii while living in Oakland, Calif.

“It all started when my friends and I met at night in a parking lot,” Luck said. “I told them, ‘If I come back to stay, let’s play music: You play drums, and you play bass, and I’ll play guitar.’ Luck went back to living in Oakland then, but soon the gang violence increased and the city began to wear on her. It was cold, and she more than ever became a recluse, spending days on end inside the house. After being robbed at gunpoint, she missed Hawaii more than ever, moved back home and made good on that promise to start the band, called Already Sweaty. They played their first show in January.

“With a space to practice into the late hours of the morning, we formed our own sound. It started off with us, just learning our instruments, but now that we know how to play we actually make songs that are listenable,” she said. Moving back to Hawaii resulted in positive changes to Luck’s life and surroundings. Now, she’s outside in the sunshine – and in love. Life is full of twists and turns.

Luck said these days she enjoys activities in Hawaii that inspire her, including playing music in front of
a crowd with a lot of energy and interaction.

But sometimes life is as simple as coming in from a long day at school or work, and playing music, sometimes with some beer. Those things help negate any bad feelings carried or brought in from the outside. It’s these moment she hopes to transform and evolve into a provoking lyric and her next song.

She spends time “finding God in the moments of man, which can inspire, even from the strum of a dissonant chord or a thought, and evolve into a provoking lyric”.

Ka La is the student newspaper of Honolulu Community College. It is entirely student run and operated under the supervision of the school’s Student Media Board.

Its offices are located on the ground floor of Building 2, just around the corner from the book store.